skip to main | skip to sidebar

“As a result of the advice you have provided to government and B.C.’s unique real estate conditions, the Province is proposing to increase the threshold for B.C.,” said Colin Hansen, Minister of Finance, in a statement to CHBA BC early today.

The Province is proposing to increase the threshold for the B.C. HST new housing rebate from $400,000 to $525,000 to ensure that, on average, purchasers of new homes up to $525,000 pay no more tax due to harmonization than is currently embedded as PST. Purchasers of new homes would be eligible for a rebate of 71.43 per cent of the provincial portion of the HST paid on a new home, up to a maximum of $26,250. Homes above $525,000 would receive a flat rebate of $26,250 or the same 5% that CHBA BC has recommended. This enhanced rebate represents a 30 per cent increase in the threshold and maximum rebate available.

“CHBA BC has worked diligently to ensure meaningful change to the HST threshold and we are pleased that government has acknowledged our recommendations in their final decision. We will over the next two years continue to compile empirical data to demonstrate to government that this threshold sill needs to be raised. Indexing will also be top of mind as we continue lobbying,” said Bob Deeks, President of CHBA BC.

The Province is also proposing transitional rules for new housing. The provincial portion of the HST would not apply to sales of new homes where ownership or possession is transferred before July 1, 2010.

CHBA BC suggested to government that new houses should be entitled to grandparenting up to July 1, 2010. Grandparenting rules issued in today’s notice state that sales of newly constructed or substantially renovated homes would be grandparented where the written agreements of purchase and sale are entered into on or before November 18, 2009 and both ownership and possession of the homes are transferred under the agreement after June 2010.

The Canadian Home Builders’ Association of BC, a viable industry driven organization, is the voice of the residential construction industry in BC, and is built on a vision of strong and positive roles for the housing industry. CHBA BC is committed to supporting the professionalism of our over 1700 members and providing affordability, quality and choice for consumers. CHBA BC’s voluntary membership comprises builders, developers, renovators, suppliers and other professionals who are dedicated to industry excellence.

Further Information
Nafisa Abdulla, Director of Communications
Canadian Home Builders’ Association of BC
604.432.7112
Posted by Ken Kunka at 8:24 AM 2 comments:

Green Roofs in the Okanagan Kelowna 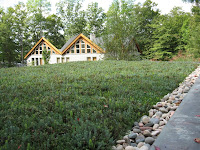 If you are a homeowner or commercial building owner and you are looking to replace your roof there is a new option out there for you to consider, and that is to replace your existing roof with a green roof.
A green roof system is an extension of the existing roof which involves a high quality water proofing and root repellent system, a drainage system, filter cloth, a lightweight growing medium and plants.
Modern green roof systems were developed in Europe in the 1970’s and they have become very popular. In certain cities in Europe, green roofs are mandated for all new construction. In North America, the benefits of green roof technologies are poorly understood and the market remains immature, despite the efforts of several industry leaders. However, this is changing rapidly in some areas, such as Vancouver, which has over four hundred thousand sq. ft. of green roofs within its boundaries.
Some of the benefits of green roofs are:
• Protection of roof membrane resulting in a longer material lifespan (it is estimated that green roofs will last up to twice as long as conventional roofs), resulting in decreased maintenance and savings in replacement costs.
• Savings on energy heating and cooling costs, depending on the size of the building, climate and type of green roof. Studies at BCIT have found up to a 66 % reduction in cooling costs on a one story building.
• Improves air quality and lowers ambient temperature
• Storm water retention
• Beautifying and reclaiming unused space
• Increased property value
While there are some challenges adapting green roofs to the Okanagan climate, these can be overcome by proper planning and selection of plants.

or contact www.flywheelbuildingsolutions.com
Posted by Ken Kunka at 5:57 AM 4 comments:

Ken Kunka
Kelowna, BC, Canada
Flywheel Building Solutions was created by Ken Kunka to address the problems he has seen as a builder, designer and inspector over the last 17 years. "Unfortunately, I have seen too many projects lose momentum due to a lack of planning, capital and or construction knowledge. I love to learn and teach and would like to impart my years of design, build and inspection experience to the most important person in the process" - Ken Kunka AScT, BCQ

"For the uneducated(like me) - dealing with the city has been an absolute NIGHTMARE. We thought we'd done our homework well before starting, and we were upfront with our intentions. It is very intimidating, and discouraging. If you have any clients who are "on the fence" about using Ken Kunka and Flywheel Building Solutions, please have me give them a call and they can learn from our pain!" Gordon S.

"We were very disappointed with the entire process when we constructed our second home. We felt like we were misunderstood by our designer and contractor and we never knew who would show up on site next and when they would finish. It left us with very little confidence in the buiding process but we look forward to working with Flywheel as we prepare to turn our house into our dream home in 2008."
James and Bianca Shaw.

" I cannot tell you how many clients come into our store looking to buy $5000 flooring for a $500 000 house because they have run out of money. Having someone to help them with organizing their project and keeping them on budget is an excellent idea" Cheri Peters, Sears Flooring, Westbank